A teal organization in a DevOps world

Tonight was supposed to be a big night for the Cycloid team. We turn 5 today and, unlike other 5-year-olds, we planned to celebrate in a swanky Paris venue, partying the night away. Like the rest of the world, however, our party plans have been put on hold, and if we celebrate our 5th birthday at all today, it will be by raising a toast from the comfort of our (respective and separate) living rooms.

To mark the occasion in a much more coronavirus-friendly way, we've decided to write a series of blog posts delving into 5 of Cycloid's defining features instead - one for each of our years in business. It may not be as exciting as the champagne and dancing we had planned, but right now, it's the best we can do!

Since we've been weathering the Covid-19 crisis well and our working life has barely changed, these 5 articles might prove to be an interesting look into how Cycloid was founded and operates.

Today, we kick off by talking about teal organizations. The company was founded on the concept and strives to embody teal values in everything it does. It isn't easy and it requires constant vigilance, but we continue to think it's the only enlightened way forward.

The rest of the series will be published over the next few weeks. We'll add links here as the articles are published.

The very short story is that the concept of teal organizations comes from Frederic Laloux's 2014 book Reinventing Organizations. He maintains that there have been various stages of human consciousness over time, all of which have impacted management and business style. Each stage is given a color, and the teal stage (teal is the blue below) is next in line.

To fully understand the theory, reading the book is essential.  It is a fully-fledged sociological study and puts the "color code" into a much more complex and informative context. If you're not planning on reading the book (or simply haven't gotten around to it), the bottom line is that all stages evolve towards a better future. Teal is desirable, as it offers a more enlightened, modern view of business and is quite possibly the answer if you, as Laloux maintains many do, feel like modern business culture (orange/green or achievement-based/pluralistic) is soulless and at odds with your "gut feel".

As we've talked about before, when Benjamin Brial founded Cycloid in 2015, he had read Laloux's work and was strongly influenced by it. He wanted a different type of organization and, since then, has worked to achieve it. By his own admission, it's not always easy.

Sometimes the path of least resistance is the orange one. Sometimes new employees don't really "get" it and are uncomfortable as a result. Occasionally,  in periods of crisis or intensity, green traits will slip in. Even so, it's not a cause for concern - as long as it's noticed and rectified, it's all part of the evolutionary process which, as you'll see in a moment, is essential to the teal process itself.

I won't lie - Laloux's book is a sociological treatise, not beach reading. He covers the theoretical aspects well and fully and there's no need to go over them again here. Instead, we'll take a more practical look at teal organizations. The three aspects that underlie teal are:

Clearly what you see as the benefits depend a little on your own beliefs and culture. For some, self-management, wholeness, and evolutionary purpose make total sense - it's not a way to evolve, it's the only way to evolve (Benjamin is in this camp!) and they are the benefits in and of themselves. If you're more "old-school", it may seem strange or even ridiculous - but we'd still suggest reading the book before making a final decision. 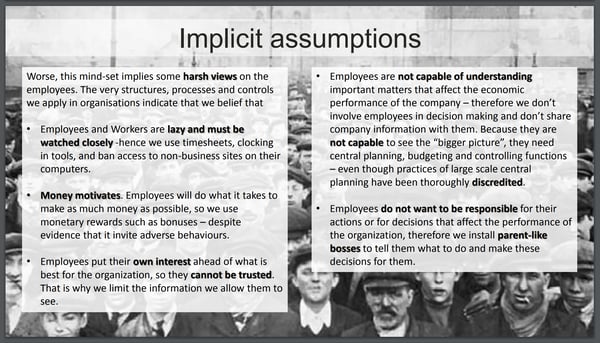 These "implicit assumptions" are the kind of old-school beliefs that underlie the orange stage of evolution. Do any sound familiar?

What are the difficulties in implementing teal?

The interesting thing about Laloux's stages is that - contrary to what you might think - they change from one to another quite quickly. There is an inflection point and, from then on, more and more examples of the new stage start to appear.  Even so, you can't simply "implement" an evolutionary stage - you can only encourage it.  There's no teal organization worksheet or starter pack. It's more likely to come about with the founding of a new company (like Cycloid) or with a rebirth ushered in by a seismic change (perhaps coronavirus?) or new company thought leaders who are familiar with the concepts and willing to champion it in the larger organization.

What is the intersection with DevOps?

If you're interested in DevOps, it's likely that you'll see some points of commonality between DevOps thinking and teal organization.  As put succinctly by Dimitri Koutsos;

"The willingness to transform structures, rethink functions and collaborate freely across all directions, are prerequisites that those organizational forms do not meet."

When he talks about "those organizational forms" he's talking about orange and green stages of evolution. And it's true; the organizational features that are common in these stages - especially orange - often feature silos, rigid structures, strict job distinctions, and other aspects that are not friendly to DevOps thinking. From a theoretical position, at the very least, it would seem that DevOps could fit very comfortably into a teal organization.

How do you find out more?

How you go from here depends very much on who you are and what you believe. If you're in a position of influence - and in this context, that means starting a company or leading one - you'll be in a position to actively move towards teal. If you're not, you'll have to look for companies to join that are already aware of and pursuing a teal evolution. It will be obvious from the way they talk about their organizational structure and attitudes towards hiring - just look at our company page as an example.

No matter which group you belong in, though, if you have an interest in business organization, consider reading Reinventing Organizations. No matter your confidence in his theory, it's undeniable that business today looks nothing like business 100 years ago. It will change and it is changing, and it's just as likely to change to teal as not. If you read the book, you'll have expanded your horizons and gotten ahead of the curve. You could even be way in front of it, depending on how things turn out - but only time will tell.

Next part of the series

In today's coronavirus-ridden context, remote working has taken on a new and critical role in the world of business. We've been remote-first since founding and we're going to share our experiences. If you're newly remote or you think it might be in the future of your business, it will definitely be worth a read.

This article has been updated for January 2022 Can you remember the time 2 years ago when you would...
May 21 - 4 min read

Optimizing the management of hybrid multi-cloud

A suitably designed, integrated and managed hybrid cloud ecosystem can be as secure and efficient...
Apr 07 - 4 min read