This is the last article on KubeCon + CloudNativeCon Europe 2022! After mentioning confidential containers and other fascinating subjects like OpenTelemetry, what would this last day have in store for us?

The keynotes of this last day were the shortest of the three days. And just like the day before, no big announcements were on the horizon.

Apple won the End User Award this year (despite a minor failure of the presenter during the announcement 😁). This award is given to the company that has made the most significant contributions to the cloud-native ecosystem. Congratulations!

So, as in the previous article, let's take an overview of the three most significant sessions of this day. And one thing is sure, I did well to stay online until the end of the event! 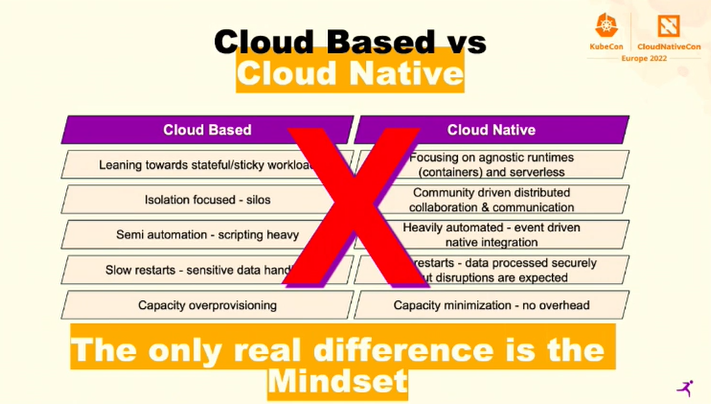 You know, I always say that what I appreciate the most in our “tech” world is everything that revolves around technique. Approaches, strategies, etc. And clearly, this talk summed up my thinking on many things in a lot of ways.

Indeed, Max Körbächer, a speaker that I greatly appreciate, managed the “feat” (in my opinion) of bringing up the subject of cloud-native without going into technique too much. And by focusing on everything, ultimately the most important: mindset, strategies, & patterns.

Indeed, as I already explained in a talk (in French) during DevOps D-Day 2021, Cloud-Native is much more than just a technique. And in this talk, Max clearly expresses this by giving concrete keys to start or consolidate an approach resolutely turned towards the cloud.

In summary and without spoilers, this talk is a gold mine that I highly recommend in the replay, as soon as the video is available on the YouTube channel of the CNCF! 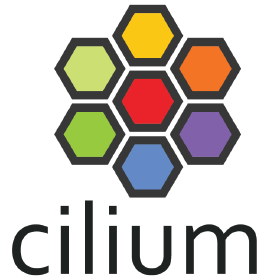 The second session of the most interesting for the day is around the Cilium project. Liz Rice provided an interesting overview of Cilium, first as an eBPF-based Kubernetes CNI (Containers Network Interface). Then on the “service mesh” dimension that the product takes.

This talk also highlighted Cilium Hubble for the observability part and especially the power of eBPF, which makes it possible to avoid having a “sidecar container” to access the network traffic of a Kubernetes pod.

Cilium thus seems more efficient than other service mesh solutions thanks to this. It even makes it possible to manage L7 traffic (layer 7 of the OSI model, i.e., at the application level).

A solution to test, in my opinion!

Finally, to end this KubeCon, what could be better than an introduction and a demonstration of a product that I had already seen in the past, which hadn't motivated me (because I saw little/no interest) and who, in the end, entirely made me change my mind?

It’s Crossplane! And one thing is sure. If I had to go in-depth into a tool immediately while looking at the possibilities of adaptation with Cycloid, it would be this one!

The maintainers present at this presentation (Jared Watts, Steven Borreli & Yury Tsarev) described Crossplane as a "framework for building your own cloud-native control planes".

There's no longer a need to directly query the AWS API (via TerraForm?) to, for example, create an S3 bucket. By going through Crossplane and declaring this bucket like any Kubernetes object, a “controller” will do what is necessary to create and maintain the desired element.

The little extra? The reconciliation loop of Kubernetes allows the controller to “keep” the bucket if it is accidentally deleted (to remain consistent with the “desired” state as defined)!

Thus, Kubernetes can become the true “source of truth” for all infrastructure elements. A fascinating approach that gives me a lot of ideas for implementation with Cycloid! Maybe a Cycloid provider too? The future will tell!

And that's it for this final summary of KubeCon + CloudNativeCon EU 2022! This year was very enriching and full of discoveries, even virtually. And who knows, maybe face-to-face next year!

As always, let me know what you thought of this year’s KubeCon on Twitter, where I often "live-tweet" events in which I participate! See you soon for new articles on the Cycloid blog!

TerraCognita is a key part of Cycloid. We call it our "reverse Terraform" and we're going to show...
May 15 - 3 min read