Canceling an event - experience sharing and lessons learned from a fail

It's probably happened to every company at least once. Here at Cycloid, we are experiencing what you might call a fail.

The first Cycloid hackathon was supposed to start today. The next 72 hours should have been dedicated to hacking on the environmental impact of cloud computing. But we just didn’t have enough participants to make it viable, and we had no other other reasonable choice than to cancel the event. But we thought it was a good idea to think about and share the why. 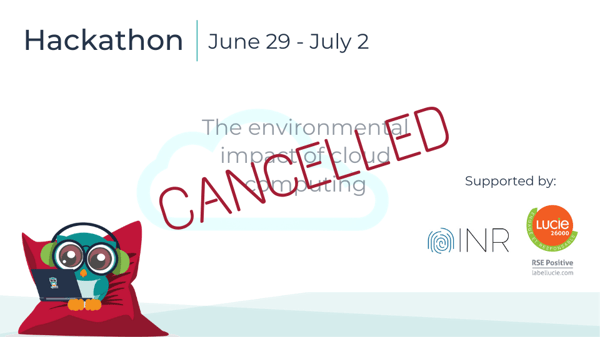 Why this event now?

We wanted to try something new for Cycloid (even if not new for others) and to leverage this weird, in-between period by creating an opportunity to focus on something that matters.

We started thinking about this hackathon at the beginning of the Covid-19 crisis. We thought of it as a way to connect people over something other than Coronavirus and to anticipate the weird “post-Covid” time. We decided to go for a 100% remote format that not only fits our full remote DNA, but also perfectly suits the current global situation where every unnecessary move is being assessed. We wanted to give people something to focus on that wasn't coronavirus!

It turned out, however, that this approach was incompatible with the situation itself: the impact of the crisis is huge and everyone is impacted in every possible way. Why would you take part in a hackathon looking to the future, when you’re uncertain about what’s going to happen next week?

Another problem: with the event, we were addressing young startups and students. The students, after wrestling with the problems surrounding the end of their school year, are now done and on a well-deserved vacation. We think they’d rather spend their free time relaxing, being with friends, traveling, and generally recovering from confinement and its psychological side effects.

For startups, it’s even more complex. Most of them are focusing exclusively on actions to help their business survive the crisis. And, in addition to that, people are mid-way between being back to the business 200% and still being stuck at home dealing with kids and work at the same time.

Yes... we are far from being back to normal and the impact is absolutely not neutral!

Another thing that played an important role is the internal resources working on this event and their bandwidth. As a startup ourselves, we didn’t have a dedicated team working on it as their main topic. We had two people, one technical and one marketing, dealing with it like their usual tasks, in parallel with every other thing. We based our estimation of the required work on the data we found and jumped in. We missed the fact that this data was probably based on the experience of big names, companies with a specific team dedicating time on such projects.

All this meant that we started publicizing the hackathon only 3 weeks ahead of the event, leaving too little time to spread the word and resulting in way too few registrations (but we’re sincerely grateful for those registrations!). Seeing this, we put in some last-ditch effort, but it was too late. The last-minute efforts didn’t change the game. And when one of the teams had to drop out because of their workload, we had to make a decision.

So, mid-last week, we decided to cancel the hackathon. It was disappointing but also the right thing to do.

It’s not a coincidence that hackathons are often organized by major companies. Sheer will is not enough; you need people working on it as their primary task, people who won’t have to deal with 50 other topics at the same time. When you’re not big, you also need to allocate a lot more time than the month of communications we saw in the stats. You need more time to diversify, to reach out to the right people.

We did well on a number of things though. We engaged with relevant partners on the environmental aspect - thanks to Agence LUCIE and Institut du Numérique Responsable for joining the project. We reached out to incubators so they could spread the word to their incubated startups, and to engineering schools to relay to their students. We designed it 100% remote and we communicated well. It was just not enough: it didn’t succeed BUT it’s a step, it's tentative, and we won’t stop here. We just need to remember what we missed this time to hopefully succeed the next!

Cycloid is a DevOps framework that simplifies DevOps and Cloud adoption, ensuring both the flexibility needed by end-users and the governance required by DevOps. We simplify the way people use technology, and help them work smarter and contribute to a project, regardless their skillset. We bridge the gap between teams, infra, and tools within a collaborative control interface, interoperable with an existing portal, modular, managing the entire apps’ life cycle.